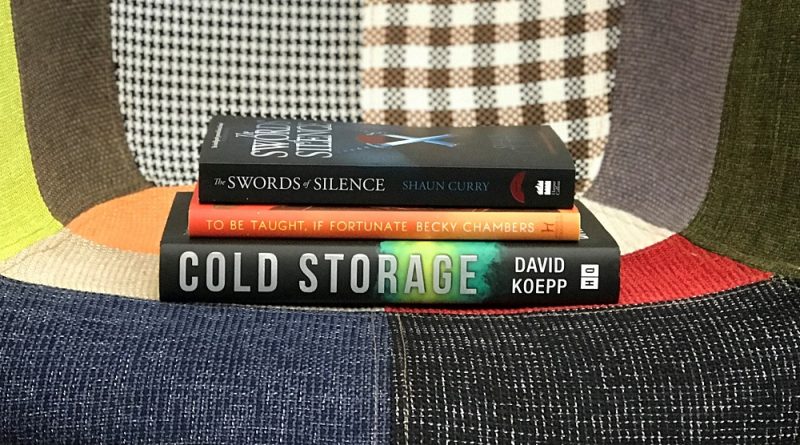 How on Earth did I choose the books?

The Autumn box is perhaps the most difficult box of the year to select books for, the publishers make it difficult by releasing a tonne of great books around September in time for the Christmas build up.

Starting the monthly crime subscription did mean I got to choose a couple of extra crime novels from this wonderful glut of titles, but for the sci-fi & fantasy box I was still restricted to just three. So how on Earth did I choose?

I am privileged to get to read ARCs, advanced review copies, from a range of publishers and I read a lot of great books. I read all the books that go in our boxes and I make notes as I go along. I make notes on themes, characters, how the books make me feel, how much the books made me think or laugh or gasp or root for the characters and anything else that stands out. To anyone else they might appear to be just a rambling mess in a variety of different colours 🙂

After that, I look at what novels will work together well and will fit in the boxes. I try to include a range of books particularly as I am quite a mood reader, sometimes I fancy something to make me laugh, or take me on a space voyage or on a roller coaster thrill ride. I rarely read 2 similar books in a row unless it’s a series. Stu Turton (author of The Seven Deaths of Evelyn Hardcastle) once described this to me as “liking genre whiplash”. 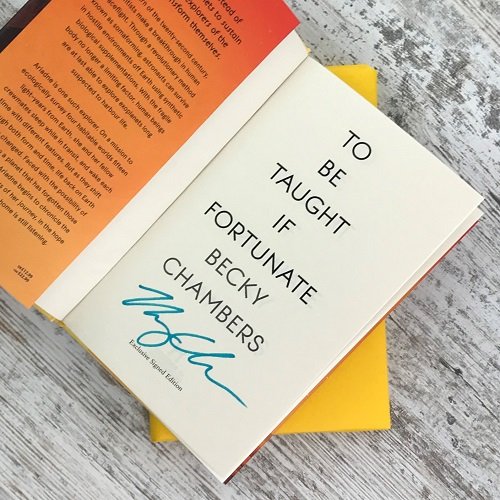 The first book I settled on was To Be Taught, If Fortunate by Becky Chambers. I admit I was already a fan of Becky’s having read her Wayfarer series so I had been looking forward to reading it, but even if I hadn’t the first few pages were just such a hook. This is Becky's first work that stands alone from her Wayfarer series and while it is a novella in my opinion there was no less substance or feeling.

I don’t talk to my husband about books all that much, we have different tastes in books (with one or two notable exceptions) and I get through an alarming (to him) number of them so somehow it just doesn’t happen that often, but I actually found myself telling him all about this one and how much of an impact it had on me from the very first page. In fact I read out the first page to him over the phone, something I have never done before! And having said that I think the second half of the book is better than the first half.

I didn’t make many notes for this one, the impact was just so immediate and clear there was really no need. I loved it, I wanted it, I just had to make it happen in terms of getting signed books and an interview.

Then came a book that a publisher recommended to me, “Just read it” she said without any fanfare or further argument. There was a time when contagion/infectious disease story lines were everywhere (books, TV and films) and I thought I’d had enough, that they had all been told so I might not have picked this one up for myself. The book was Cold Storage by David Koepp and I was happy to have been proven SO wrong by this fantastic novel.

David Koepp was the screenwriter on Jurassic Park among other films, which gives you a clue as to this authors talent and quality. This is his debut novel and it is a terrifying, thrill ride which will also make you laugh!

It’s fast paced and tense, it reminded me of the feeling I get when I read crime thrillers. It’s fresh and new with characters that will make you laugh and feel desperate to help and a plot that makes your heart beat faster and keeps you on the edge of your seat. It's a real riot but be warned, it's pretty gross in places!

The quality of the writing is amazing and I think you are going to enjoy it. This was an astonishing book that surpassed all my expectations.

As a high-profile script writer in Hollywood, David’s schedule is very full so I was over the moon that we managed to catch him in the UK to sign our copies! 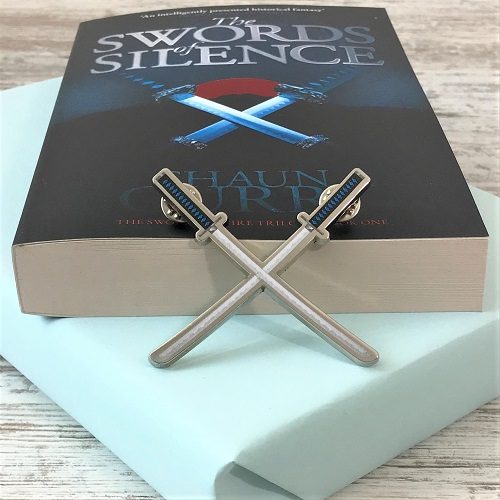 The third novel (last but by no means least) was The Swords of Silence by Shaun Curry. I was tempted by this as soon as I read the blurb because I am a fan of historical fiction and historical fantasy fiction.

I had never read anything based in 17th century Japan before and dived in to find out a lot more about this era than I ever could have imagined. This was a brutal and cruel period in Japanese history dominated by the Shogun and his Samurai and this is a story of faith and survival in the face of overwhelming opposition.

I have wanted to include an enamel pin in our boxes for a while and the crossed Samurai swords on the cover of the book just seemed like the perfect opportunity, mine is now pinned to my work apron looking great!

While there is a strong fantasy element to the book it was inspired by real world history and Shaun Curry says “Who am I to soften the edges of history to create a more gentle story?” This is a powerful book, the first in a trilogy and the ending left me very excited for the next installment.

So there we are, my thoughts on the novels from the November 2019 science fiction & fantasy book box. As you enjoy reading these, I am already reading and making notes on books for the next boxes...

Do let me know what you all thought of the choices, I'd love to hear!