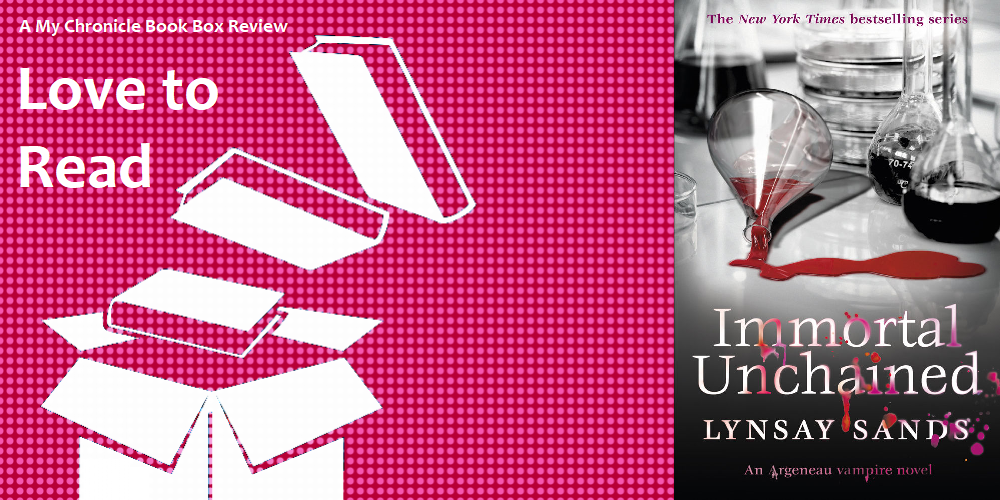 (Argeneau Series book #25)
Publisher: Orion
Publication date: 30 March 2017
I received a review copy from the publisher via Netgalley in exchange for an honest review. This does not affect my review and all opinions are my own.

Ever since Domitian Argenis recognized Sarita as his life mate, he’s been waiting for the perfect moment to claim her. Those fantasies did not include him being chained to a table in a secret lab, or both of them being held hostage by a mad scientist. Somehow, they have to escape…

Sarita has seen some crazy things as a cop, but nothing to rival Domitian. A vampire? Seriously? But his healing ability, incredible powers, and their mind-blowing physical connection-none of it should be possible, yet her body knows differently. Now, not only do they have to save each other, but other innocent lives are at stake. Failure is not an option, for Sarita intends for Domitian to show her exactly what an eternity of pleasure feels like…

I know Lynsay Sands is a prolific writer but I was amazed to see that this is #25 in the Argeneau series. I have read a few of the series, all of which stand alone, but not for some time. Sands has developed a winning formula for the Argeneau series with the focus of each book being the coming together of a member of the Argeneau family (all of whom are vampires and which has a very complicated family tree) with their life mate.

These books are very much paranormal romantic comedies. The books do not take themselves too seriously and Lynsay Sands has a wicked sense of humour. The science behind the characters vampirism is hilarious with them actually being Atlanteans filled with nano technology that requires more blood as fuel than a human can produce. It is also ridiculous that despite the Argeneaus having lived for centuries, and in this case even millennia, they are all finding their life mates within a few short years. But this is Lynsay Sands genius, she knows this, she knows we know this and we all ignore it by unspoken agreement for the duration of the book for the sheer fun of it. This book, like those before it, mixes humour and action with romance and lust. There was enough lust in this book to make me blush!

When Domitian Argenis (a variation on Argeneau) tries to rescue the woman he knows is his lifemate from a dangerous scientist, he ends up trapped with her alone on a small island with no clothes other than underwear for either of them and rather revealing underwear at that. The dastardly Dr Dressler clearly has some unpleasant experiment in mind for them so they must fight their lifemate-lust, a powerful force it seems, and Dressler’s security to escape the island. As well as freeing themselves, they hope to facilitate the rescue of a number of other vampires (they prefer the term Immortals) also held captive elsewhere. Did I mention that Sarita, Domitian’s lifemate has never met or even heard of Domitian before? So in the midst of all this chaos, Domitian is trying to woo the lovely Sarita into an eternal relationship with him!

It all sounds rather mad-cap and it is, enjoyably so. The dialogue is also well written and the story line well-paced. Despite this, I must confess this isn’t my favourite of the Argeneau books. It wasn’t as funny in my personal opinion (humour is such a subjective thing that no doubt others would strongly disagree) as some of the others I have read which may have had to do with the limited scope of a small island and just the two of them for much of the book. I also had trouble with the lust starting very near the beginning of the book, almost as soon as the pair met, and then the romance having to catch up afterwards. I have preferred a bit of romantic relationship build up before the passion and lust overtake them.

If you haven’t read any in this series before I would recommend starting with two of my favourites ‘Single, White Vampire’ and ‘Tall, Dark and Hungry’ and if you like those read as many of the 25 in the series as you like. If on the other hand, you have read some or all of this series then read this one too and let me know what you think of it.