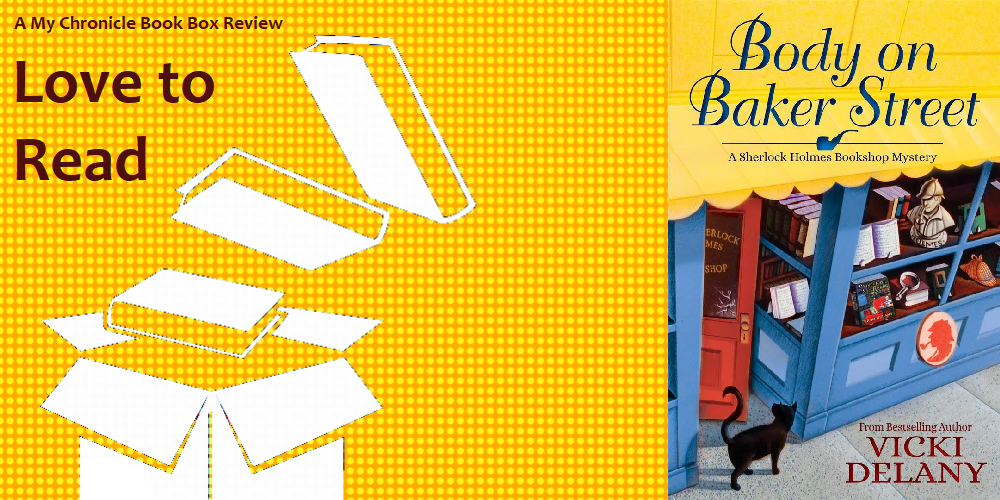 Gemma Doyle and Jayne Wilson are busy managing the Sherlock Holmes Bookshop and Emporium on Baker Street and adjoining Mrs. Hudson’s Tea Room in anticipation of the store’s upcoming book signing with the illustrious Renalta Van Markoff, author of the controversial Hudson and Holmes mystery series. But during the author Q&A session, dedicated Sherlockian Donald Morris verbally attacks Renalta and her series for disgracing Sherlock’s legacy, only to be publicly humiliated when the author triumphantly lashes back and gains the upper hand. That is until Renalta collapses on the table—dead.

Donald insists he didn’t do it and pleads to his friends to clear his name. Fortunately, Gemma and Jayne have no shortage of suspects between author’s bullied personal assistant, her frustrated publicist, the hapless publisher, a handsome rare book dealer, an obsessively rabid fan, and a world of other Sherlock enthusiasts with strong objections to Renalta’s depiction of the Great Detective. It’s up to the shrewd sleuthing duo to eliminate the impossible and deduce the truth before the West London police arrest an innocent man in Body on Baker Street, the second Sherlock Homes Bookshop mystery perfect for fans of Miranda James and Kate Carlisle.

This is the second Sherlock Homes Bookshop mystery by Vicki Delaney and like the first is a good fun murder mystery with a light-hearted Sherlock Holmes theme.

Gemma Doyle owns a Sherlock Holme’s book shop and emporium in West London, Massachusetts and 50% of the adjoining Mrs Hudson’s tea room, with her best friend Jayne Wilson. In the height of the summer season the bookshop is thrown into chaos by Renalta Van Markoff, bestselling author of the Sherlock Holmes pastiche Hudson and Holmes mystery series. While the racy Hudson and Holmes series may not be to Gemma’s tastes, the bodice ripping romances are loved by Jayne and many others, and agreeing to a last minute book signing makes good business sense.

The over the top author arrives for the signing and sweeps into the book shop, in a cape no less, bringing trouble with her. When she suspiciously dies right there in the book shop, Donald, a regular customer and committed Sherlockian, is accused of murder and he asks Gemma to assume the role of detective to prove his innocence. Having cleared her own name in Elementary, She Read, Gemma has some detecting experience and uses her above average intelligence and powers of observation to investigate with the support of her best friend Jayne.

The police, in the form of Detectives Ryan Ashburton and Louise Estrada, would rather she did not get involved though for rather different reasons. Detective Ashburton and Gemma were almost engaged once upon a time and he seems to want to protect her whereas Detective Estrada dislikes Gemma for a number of reasons (see also Elementary, She Read) and considers her to be interfering.

This is a great murder mystery and I really enjoyed how Vicki Delany set the scene and introduced a cast of potential suspects before the inevitable murder occurred. I loved the anticipation I felt for the murder you could see was coming. The solving of the murder is well plotted and there are subtle clues scattered for the observant.

Following on from the first book the strong feelings between Gemma and Ryan remain unresolved but Gemma also remains open to the possibility of starting a relationship with Grant (rare book dealer and only briefly considered a suspect!) which he gently pursues. Jayne has firmly set her hat on one of Gemma’s suitors but I shan’t give away which one.

This is a strong sequel and I am looking forward to the next in the series.