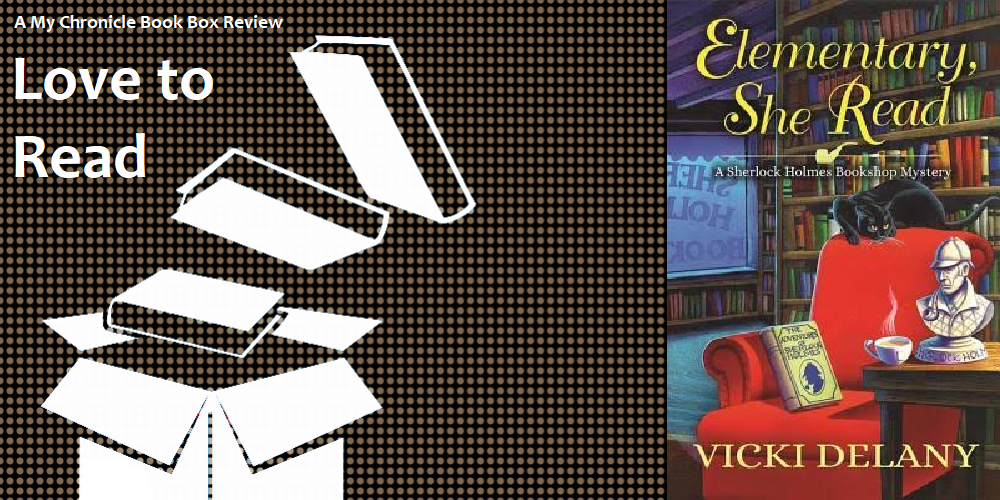 Gemma Doyle, a transplanted Englishwoman, has returned to the quaint town of West London on Cape Cod to manage her Great Uncle Arthur’s Sherlock Holmes Bookshop and Emporium. The shop–located at 222 Baker Street–specializes in the Holmes canon and pastiche, and is also the home of Moriarty the cat. When Gemma finds a rare and potentially valuable magazine containing the first Sherlock Homes story hidden in the bookshop, she and her friend Jayne (who runs the adjoining Mrs. Hudson’s Tea Room) set off to find the owner, only to stumble upon a dead body.

The highly perceptive Gemma is the police’s first suspect, so she puts her consummate powers of deduction to work to clear her name, investigating a handsome rare books expert, the dead woman’s suspiciously unmoved son, and a whole family of greedy characters desperate to cash in on their inheritance. But when Gemma and Jayne accidentally place themselves at a second murder scene, it’s a race to uncover the truth before the detectives lock them up for good.

Fans of Sherlock Holmes will delight in the sleuthing duo of Gemma and Jayne in Elementary, She Read, the clever and captivating series debut by nationally bestselling author Vicki Delany.

Cosy mystery books are my guilty pleasure at the moment and I was tempted to read this book initially by the description that it was a Sherlock Holmes Bookshop mystery. I really need a Sherlock Holmes bookshop and connected Mrs Hudson’s Tea Room in my life!

There are, of course, parallels with the Sherlock Holmes universe with the intelligent and ultra-observant Gemma assuming the role of detective and unfailingly loyal and honest Jayne Wilson the supporting role of best friend and assistant crime solver.

The mystery begins when a magazine is left hidden in Gemma’s bookshop; a quick examination indicates that it contains a very early publication of the first Sherlock Holmes story ‘A Study in Scarlett’ and could, therefore, be worth a lot of money. Using her above average powers of deduction Gemma identifies where the owner of the magazine may be staying, but when she and Jayne attempt to return the magazine they discover a murder scene.

Between Gemma’s unusual talent for observation, unconscious ignorance of social graces and lack of confidence in the abilities of the local police force she quickly manages to place herself at the top of the suspect list. Although in Gemma’s view, her only option is to investigate for herself and uncover the truth, this just makes the police and a particular detective, Louise Estrada, even more suspicious and determined to prove her guilt.

This is a fun, well-plotted mystery and the ending was a surprise to me which I always consider a good thing. It also has a cast of engaging characters about whom I am interested to read more including, but not limited to, Great Uncle Arthur, Ryan and Grant. Though he features, we do not actually meet Great Uncle Arthur, as wanderlust appears to have taken him travelling for the period of this mystery but I hope to see more of him in the next book. Ryan, a detective recently returned from the big city, is a former beau of Gemma’s but she does not seem to have the best of luck when it comes to men and he clearly does not deserve her. There are still strong feelings between them, however, and I am looking forward to seeing how things progress. These feelings are not helping rare book dealer Grant’s chances with Gemma but I hope he does not give up too easily.

For those who do not mind a little (or, indeed, rather a lot) of Sherlock Holmes pastiche and enjoy a good murder mystery then I would recommend this book to you. I will be looking out for the publication of the second in the series.