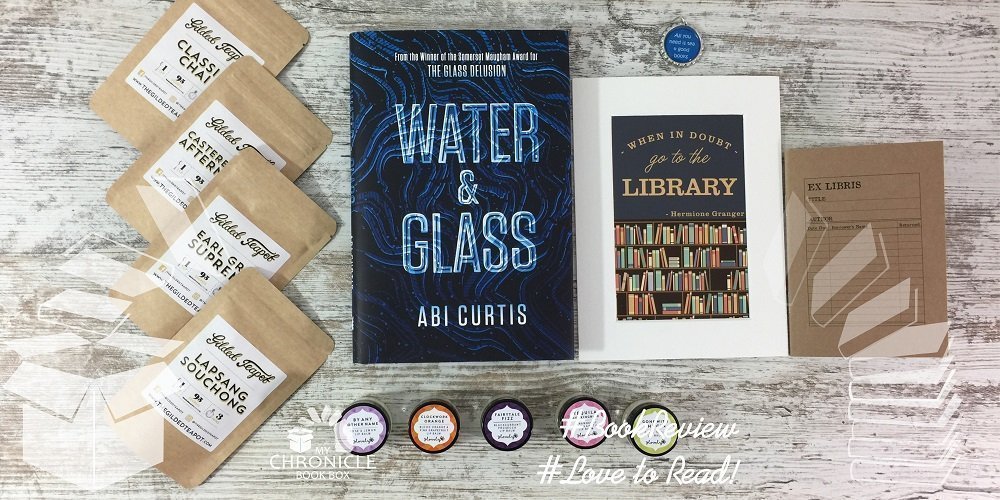 A My Chronicle Book Box review of Water & Glass by Abi Curtis.

In a dystopian near future Nerissa Crane is aboard a futuristic submarine, a survivor of an environmental catastrophe that has flooded the Earth. She is a zoologist in charge of the animals aboard and when one of her charges escapes she is forced into greater contact with her crew mates and into confronting the revelation of a bigger picture.

This book was included in our February 2018 Science Fiction & Fantasy book box.

This is a novel set on a near future dystopian Earth that has suffered a global catastrophe which has resulted in the world flooding. Nerissa Crane has lost her husband, he is presumed dead following the flooding, and she is now aboard The Baleen trying to find a way forward without him. The Baleen is a futuristic submarine with both humans and animals aboard reminiscent of Noah’s ark.

Nerissa is a zoologist and content to remain below with her charges including a pregnant elephant, to deal with her grief but when one of her animals escapes confinement she is forced to interact with her crew mates. Nerissa begins to realise that not everything is as it seems and that the reaction of humans under extreme pressure cannot always be predicted.

The escapee is a wooly rat and it is very good at evading capture. It’s use as one of the points of view is inspired and provides humour as well as further depth and comparison between human and animal natures.

With the setting on a submarine Abi conveys a real sense of claustrophobia.

This novel wasn’t quite what I expected, it was more. It was not my usual fast-paced, page-turner, it was reflective with a lot of subtext, it has several layers. Speculative fiction at it’s best. It is short but powerful and I suspect that I will find more layers and different nuances with each read of it.

The writing itself is beautifully crafted, you can tell it has been written by an award winning poet. Every so often I come across a book that slows me down and demands that I appreciate the writing and prose as well as the wonderful story. This was one of those books.

In the lower depths of a massive submarine, ship’s zoologist Nerissa Crane takes an ultrasound of a heavily pregnant Asian elephant. The elephant conceived off-ship but, it transpires, was forced on board – along with Nerissa and a hastily assembled collection of humans and animals – by an apocalyptic environmental disaster that has flooded the earth. Nerissa is calm and solitary in her work and in navigating the trauma of her husband’s presumed death in the floods; but when one of her animal charges escapes, she is reluctantly forced to enter the ship’s thrown-together communal world where she uncovers a shocking conspiracy that causes her to question who and what she is. Water & Glass is a thrilling dystopian tale about human nature – and the animal world – under great pressure and in enclosed spaces.